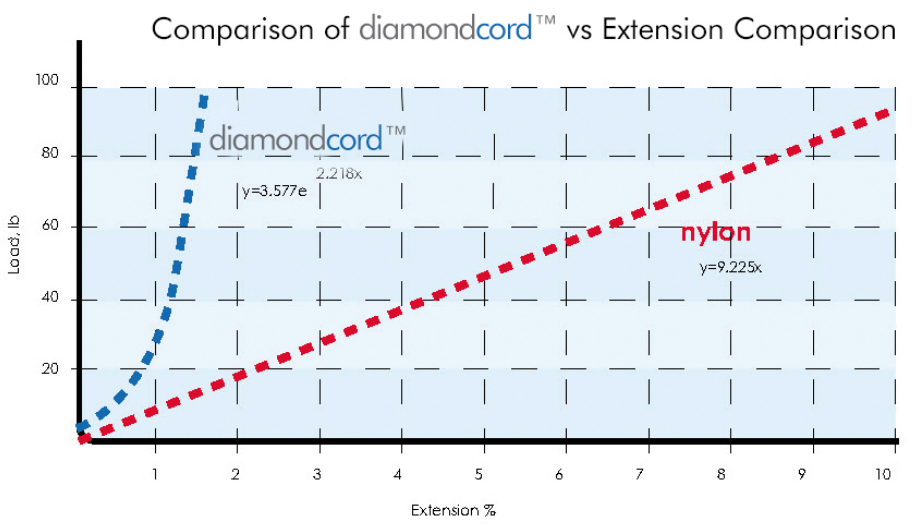 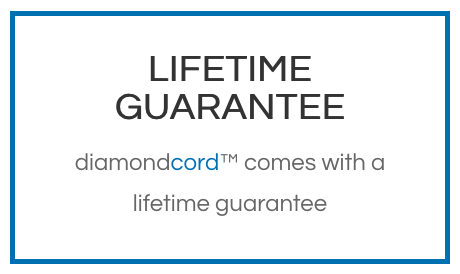 All diamondcord™ products are backed by our lifetime guarantee. You will never need to buy replacement starter pull cord again.

Gasoline engines are used on power tools, such as chain saws and snow blowers, and on vehicles, such as snowmobiles, personal water craft, and all-terrain vehicles. Many of these tools and vehicles have a manual starter pull cord mechanism to provide the initial impetus to start the engine. The pull cord is wound around a starter pulley connected to the engine’s flywheel and crankshaft. To start the engine, a user pulls the starter cord to unwind it from the pulley and impart rotation to the flywheel and crankshaft.

Engine starter pull cords are typically made of nylon fiber. Nylon pull cords sometimes do not provide enough impetus to start the engine on the first pull, or even on subsequent tries. These nylon starter cords wear out and break, rendering the engine and hence the tool or vehicle inoperable. In some applications, for example – outboard engines, all-terrain vehicles and especially snowmobiles – inability to start the engine can be life threatening.

In field trials with power tool engines equipped with the diamondcord™ improved starter pull cord cords, experienced users reported that it is easier to start the engine than the same engine equipped with a conventional nylon pull cord.

Gasoline internal-combustion piston engines are used on power tools, such as chain saws, lawn mowers and snow blowers, and on vehicles, such as snowmobiles, outboard motor boats, and all-terrain vehicles.

Many of these tools and vehicles have a manual starter mechanism employing a pull cord. Figure 1 is a schematic of a typical small one-cylinder gasoline engine with a starter-cord mechanism. The starter pull cord is wound around a pulley that is coupled to a flywheel through a clutch mechanism (not shown). The flywheel is connected to the engine’s crankshaft. Rotation of the crankshaft drives the piston through a connecting rod. When the cord is pulled out, the crankshaft rotates and drives the piston back and forth within the cylinder. The piston motion compresses a fuel-air mixture within the cylinder. A spark ignites the fuel-air mixture near the top of the stroke, driving the piston down.

Two types of starter pull cords were tested and compared in this program, a typical nylon cord and diamondcord™.

The nylon pull cord was a commercially available 4.5 mm (0.4 in.) diameter kernmantle-construction cord, sold as an after-market replacement starter pull cord. The new break strength of this cord was tested and determined to be about 3 kN (700 lb). The diamondcord™ exhibits high strength, abrasion resistance, and stiffness.

Figure 2 compares the load vs. strain characteristics for the diamondcord™ cord and the nylon cord of the same size, 3.2 mm diameter.

In these tests, the cord was not inter-warped in the manner described in those standards. Instead it was run was run through the eyelet at an angle of 20 degrees.

A tensioning load of 4.4 kg (10 lb) was hung on the end of the specimen. The specimen was cycled back and forth through the eyelet with a stroke of 38 mm (1.5 in.) at about 50 cycles per minute.

Water was applied to the specimen while stroking to simulate conditions which might be encountered in service. The abrasion resistance of nylon yarn is reduced when wet.2 Wet conditions are frequently encountered in power tool use and especially in outboard motor boats. 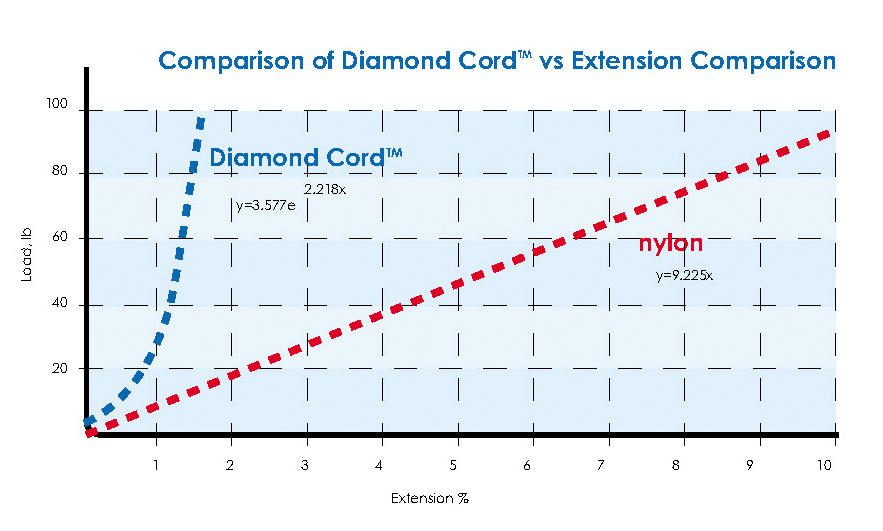 Comparison of diamondcord™ vs Extension Comparison

The test results are plotted in Figure 3.

Three nylon pull cord specimens were tested in the same manner. These nylon pull cords were judged to have failed when the sheath of the kernmantle construction completely failed, even though some internal yarns might still be intact. These failure points were at 4,400, 27,000 and 42,000 pulls respectively. The average pulls to failure, 22,677 pulls, is plotted in the figure.

Figure 4 shows the appearance of an diamondcord™ after 60,000 pulls, more than twice the average pulls to failure of the nylon cords. The diamondcord™ lasted more than 50 times longer than the nylon pull cords. 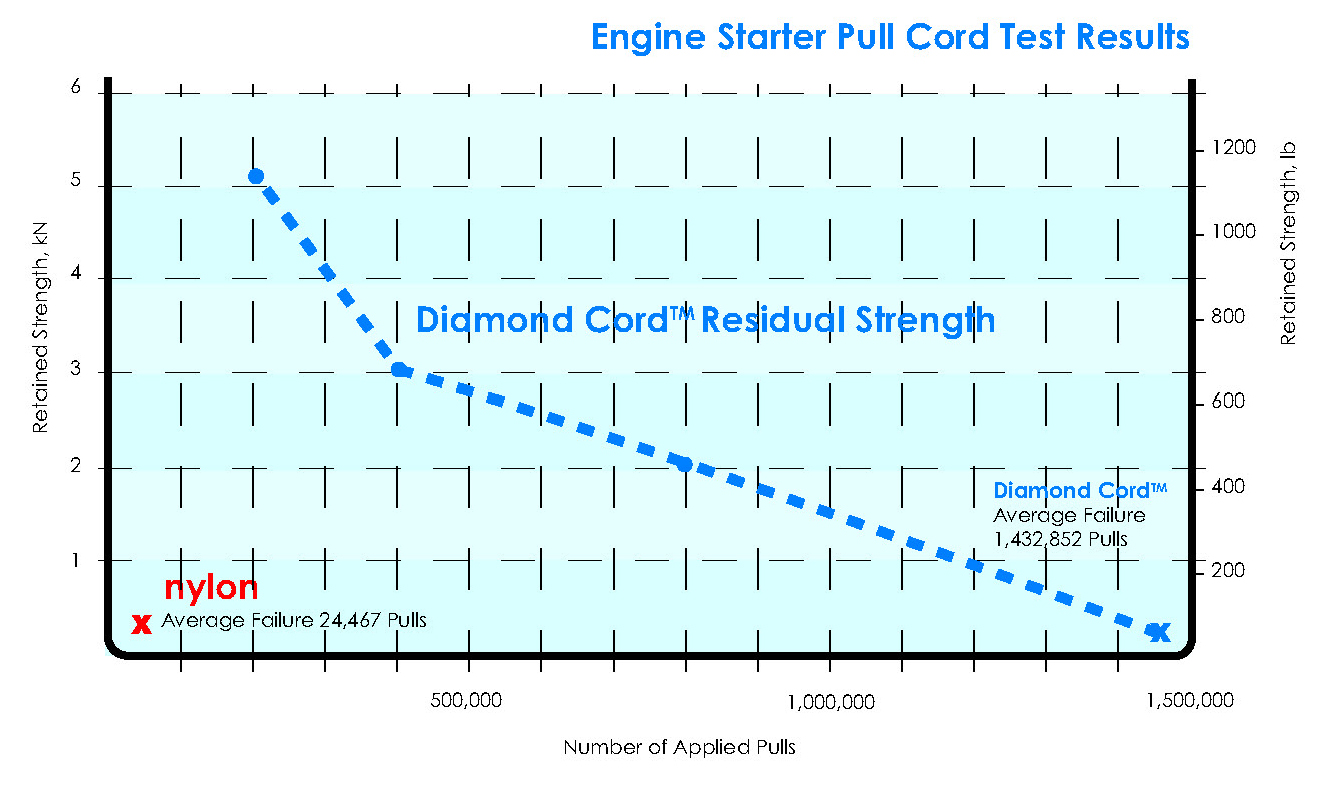 A dynamic analysis was performed to compare the flywheel speed achieved using a nylon starter pull cord with that using an diamondcord™ Unbreakable Pull Start Cord. This analysis modeled pulling the cord a distance of 800 mm (32 in.) in one second. It assumed the angular momentum inertia of the flywheel and crankshaft was 0.007 kg mm2 (23.7 lb ft2). It assumed the moving friction coefficient of all parts was 0.13 kN (30 lb). The results of the analysis are plotted in Figure 5. The handle pull distance is plotted against the left axis. The resulting flywheel speed in revolutions per second is plotted on the right axis.

There are many flywheel-speed related factors which influence the ability to start a small gasoline internal combustion piston engine.

The air-fuel mixture should be sufficiently compressed before the spark is set off, for otherwise ignition will not take place. If the flywheel is not turning fast enough, sufficient compression is not achieved, and the fuel air mixture fails to ignite.

The compression achieved in the engine cylinder can be diminished by leakage around the piston. If the engine turns faster, there is less leakage and more compression, and the likelihood of starting the engine is greater.

Ignition should take place just before the piston reaches the top of its stroke. If the flywheel is not turning fast enough, the explosion opposes the piston motion and does not impart sufficient momentum to drive the engine through a second compression cycle.

The spark which ignites the air-fuel mixture is usually energized by electric power voltage generated by a magneto attached to the shaft. The magneto-generated voltage is a function of the speed of revolution. If the engine shaft turns faster, there is more voltage, the spark has more energy, and the likelihood of starting the engine is greater.

Isn’t it annoying when you pay for something, and then it doesn’t work or it breaks after you bought it?

Even worse, when you contact the company who sold you the product, they don’t do anything to make it right.

They simply shrug it off, mumble a meaningless apology, or worse yet, they make it sound like it was your fault!

You’ll never be treated that way in dealing with us!

We offer a no-hassle, lifetime guarantee on all product lines we sell!

And when we say no-hassle, we mean it! If you have an issue with any diamond Performance product we provided, this is what we’ll do:

We stand by our products with what we believe is the best No Hassle Guarantee in the world!

Your call is important to us!
Most companies make getting a replacement under warranty difficult just because they won’t answer your call, email, etc.

Overall Satisfaction Rating Based on 0 ratings from customers